Our current nature conservation concepts aim to protect, on a scale of a few hundred years, what has been created by evolutionary forces in millions of years. What would change, when we consider evolutionary time scales?

We know that we might be causing the sixth major geological extinction event. But we also know that five major and additional minor extinction events occurred previously. Each time, the natural diversity recovered. Without the death of the dinosaurs, the amazing evolution of mammals, of which we are a part, may never have occurred.

All genera
“Well-defined” genera
Trend line
“Big Five” mass extinctions
Other mass extinctions
Million years ago
Thousands of genera
Changes in the number of animal genera in the fossil record. The rightmost yellow triangle indicates the extinction of dinosaurs and the rise of mammals. (Wikipedia)

The same will happen if we fail to protect our current biodiversity heritage. We cannot destroy life on Earth. Over the next millions of years, new, complex, and fascinating life forms and ecosystems will evolve.

Personally, I find some consolation in that. The knowledge of limits to our powers is refreshing. And I believe it is healthy to be reminded to treat Earth with the highest respect. Yes, we have become so powerful that we must act as responsible and smart navigators of our Spaceship Earth. But we should beware of patronizing Earth. The ultimate power balance is evident: If we continue our current behavior, humankind will be eliminated. Other life on Earth will persist.

However, some might ask: Why are we making so many efforts to conserve biodiversity today? After all, it will regenerate!

That is true, but there is a catch: Time. The regeneration of biodiversity occurs on a time scale of millions of years (between 0.3 and about 5 million years). These are time spans almost incomprehensible for us. 300 000 years ago our own species, Homo sapiens, just started to appear. 5500 years ago, humans invented the wheel – but we have no memory of this. We barely understand our development in the last 2500 years. That is one-thousands of the order of magnitude needed for biodiversity to recover.

If we fail to protect natural habitats, ecosystems, species and their genetic diversity, we feel some loss ourselves. But we may decide that it is a fair deal for our generation. Such as, when we exchange our coral reef ecosystems (among others) for the energy we obtain from fossil fuels. But it is the loss for the 60 000 future generations that really matters. They will have lost these genetic resources, this source of knowledge, of utility, of understanding and inspiration practically forever. Aggregated over such long time, a single extinct species in a coral reef may represent a value of trillions of US Dollar (footnote 2). 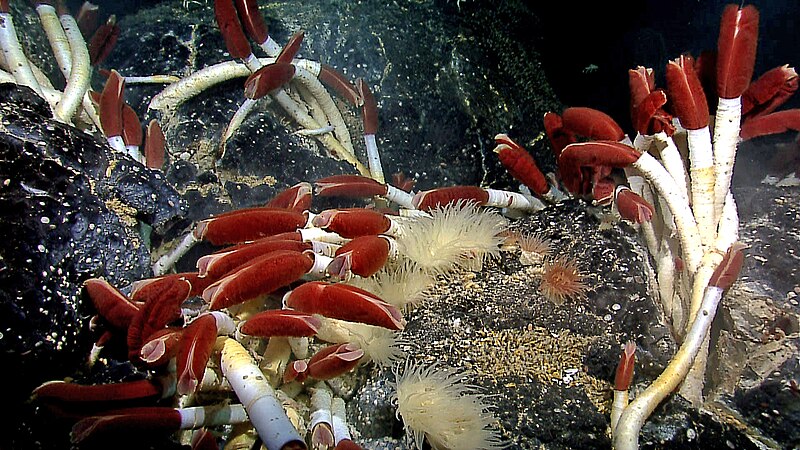 Life at a hydrothermal vent in the deep sea (Commons)
Footnote 1. A huge difference exists between exterminating all mammals, or even all vertebrates, and destroying all life on Earth. To my understanding, we cannot destroy life on Earth. Certainly not with global warming or atomic weapons. And life will neither be extinguished by a supervolcanic eruption nor by any likely asteroid impact (moon-sized objects being extremely unlikely…). Most likely, life on Earth will thrive and reinvigorate itself for the next billion years (after which changes in the sun gradually will make life on Earth harder and harder).

Footnote 2. A human generation lasts between 20 and 30 years, I calculate with 25 years. Calculating with 3 million years for the full regeneration of biodiversity, the average is 1.5 million years, i.e., 60000 generations. I have insufficient information about, e.g., the public value of new pharmaceuticals. Based on LaMattina 2015 (Forbes), I assume a new antibiotic can treat 10% of cases, thus valuing 2 billion USD/year in health care costs alone (not counting the societal benefits of longer, productive lives). Thus, if just one in a thousand species is the source of a new antibiotic, on average a species has a value of 10-3 × 2×109 = 2 million USD per year. Over 1.5 million years that makes 3 trillion US dollars. – Any help finding better publications and estimates on this?

A German translation is not yet available)

A second post, Protecting Nature in the Anthropocene analyses the general concepts of nature conservation. It is more general than this, but does perhaps need additional work. I appreciate your comments on both posts!

1 thought on “Why Should We Protect Biodiversity?”

This site uses Akismet to reduce spam. Learn how your comment data is processed.

Please comment or mail me if you find errors, omissions or can provide new citations or facts. Thank you!