Our planet as a whole is a common good, a “Planetary Commons.”1 We have inherited it from our parents and we need to preserve it for the next generation. And while negotiating and enforcing rules on the use of common resources in the present is already difficult, its equitable management spanning ourselves as well as our children (the “intergenerational commons”) is an even greater challenge.

While working on this topic I found it difficult to find a systematical overview of what this commons entails. For example, the MCC Research Institute in Berlin provides this overview: 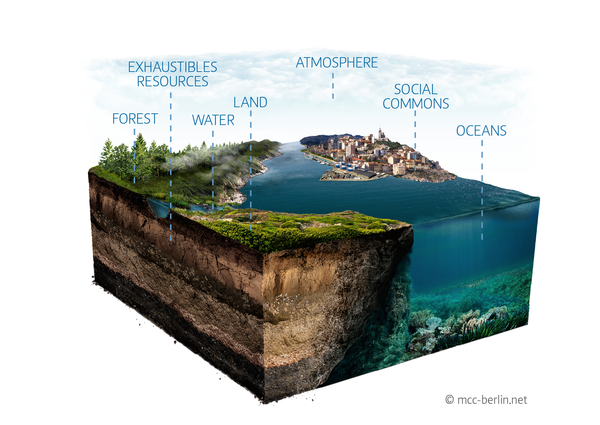 It is a nice illustration, and like every good illustration, it needs to simplify. Still, “forests, exhaustible resources, water, land, atmosphere, social commons, oceans” appeared a little bit too random to me. Let me try to sort things, if only for myself. I will first present a brief overview, followed by a longer annotated version as an appendix.

Our planetary commons consists of:

Does this make sense to bring structure into the diversity of intergenerational commons? What may I be missing?

And clearly, labeling a separate version of the MCC graph with: “Social, cultural and knowledge commons; human infrastructures; inexhaustible resources like renewable energy; non-renewable mineral deposits and fossil fuels; slowly renewable resources like genetic diversity, soil fertility, forests, fisheries, groundwater and ecosystem services; absorption capacity of atmosphere, soils and oceans for waste, pollution, and greenhouse gases”may be too complicated for some use cases. But would it be useful in others? What do you think?

This is an annotated version of the “planetary commons” classification above, which I have created during the process. I very much welcome criticism, but I am aware that this version is work-in-progress and not fully consistent.

Our planetary commons consists of:

1. The social, cultural and knowledge commons, which can in principle be shared and thus used by an unlimited number of people at the same time. Examples are:

Cultural and knowledge resources can, in principle, be used by an unlimited number of people. However:

2. Races and varieties of organisms bred by humans for human use (e.g., as food, medical, building, entertainment, etc.).

4. Natural resources which are in practice (i.e., within several hundred human generations) inexhaustible

6. Natural resources which, renewable only within a very high number of human generations. Examples include:

7. Natural resources which are tied to the entire history of Earth and are virtually non-replenishable. Examples include:

1 While studying this, I learned that the term ‘Global Commons’ has a more specific and pre-defined meaning. Instead of the “planetary commons” discussed here, it refers specifically to resource domains that lie “outside of the political reach of any one nation-state.” International law identifies exactly the High Seas, the Atmosphere, Antarctica, and Outer Space as Global Commons.

The present post is mostly a first attempt to organize my thinking about the different kinds of Commons we should consider for intergenerational justice. Pointers to good publications are most welcome!

If you are interested in the topic of intergenerational justice, I recommend the following posts:

This site uses Akismet to reduce spam. Learn how your comment data is processed.

Please comment or mail me if you find errors, omissions or can provide new citations or facts. Thank you!